As you can see below, I come up with some weird stuff late at night. lol. Do enjoy! 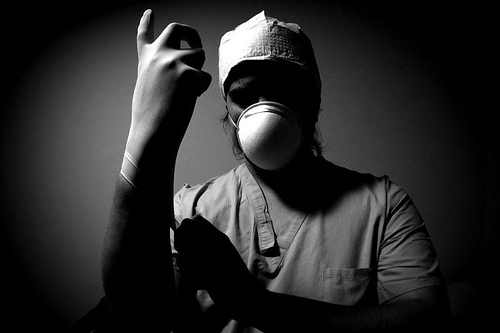 A slightly frustrated bloke stood over an operating table observing his work with doubt plaguing his optimist mind. A pair of surgical tools crash to the marble floor as the handsome male approached the sink, washing his hands of the situation, at least for now.

Minutes later, he carefully traveled through the jungle land,  fully-loaded weapon in hand, in search of god knows what. He knew the environment as he did the lines that ran across his palms. He ruled the jungles with concealed traps to catch the wild creatures that roam in search of prey — prey in the form of a human, or anything easy enough to catch.

His planned  excursion was put on hold as he was met by a wild jungle creature, resembling what was once known as a cheetah. With just one movement of the hand, the animal dashed through the woods, charging at the bloke with a murderous intent. There was not one ounce of fear in the creature, until his attack was parried by the human, who followed with a series of blows to specific areas of the animal’s body, rapidly putting it into an unconscious state, where it eventually died.

The man dragged the animal through the jungle to a hatch which led to an underground facility. The interior design was beautiful, featuring many authentic paintings which were all once famous. Following the hall of art came a theater room with a large collection if films dating back to the early days of motion pictures. Also included were many education series as well as science, religion and languages volumes.

Finally, the man returned to the room where he returned to his personal interest that again involved surgical tools just minutes before his animal catch. He then tossed the cheetah onto A nearby vacant operating table, where he began to dissect the creature and preserve its important organs into small cryogenic capsules.

Afters hours of his continued work, he placed the blood soaked operating tools onto the table and stepped back, watching happily as a woman slowly rose from the table with parts of her body in stitches. She opened her eyes and turned to the man responsible for her awakening.

“What is this?” She asked, her voice so soft and innocent.

“Earth, of course.” He responded. “You should know the answer to that question.”

She nodded. “I do… To confirm, what is the current date?”

November fist, twenty-fifty was the date, which he told her truthfully. She nodded to confirm her knowledge of that information.

“What am I?” She then asked with her head slightly tilted to the left.

“You are a cyborg,” he informed her, “The best of its kind, having all biological capabilities through today’s nano-technology, also holding an endless lifespan to which you will never become outdated or face deterioration.”

She rose her head straight once again to ask the most important of her series of questions… “Are you the same as I?”

He took two steps forward… “I am. Perhaps the greatest and most expensive project the human race had ever engaged in. unlimited space to store information, also given the the greatest gift man couldn’t give himself… Immortality. Only through cybernetic design could it be possible. And so we are the last form of human life on this planet, and with my knowledge-which you will soon obtain, we can create a form of life once again.”

She stood from the operating table, fully nude with her arms by her side. “Why did you create me?” She asked.

A Year in the Life of a True Film Addict!

Laughing in the Dark

Conversations with the other woman

I write when the choice is to die if I don't

Place to express your opinion on dreams, stories, life , as well as your own dreams.

Being a Beautiful Mess

Dealing with the mess of life, love, betrayal, divorce, and dating

The Chronicles of Me

A wonderful world full of beauty, charm and adventure.

'No story lives unless someone wants to listen' JK Rowling

The writing blog for Amanda Ching.

BRIDGING THE GAP IN URBAN CULTURE

Tales of a Traveling TWAMP

Blog with Journalistic and Historical articles

This WordPress.com site is the bee's knees